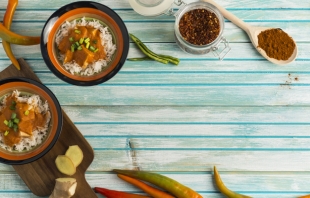 Gujarat—the jewel of western India—is famous for its art, culture, history and food. A traditional Gujarati Thali usually presents vegetables, roti, dal, rice, salad, farsan and, to top it all, chaas and a sweet dish. Gujarati snacks such as dhokla, fafda, khandvi, handvo are sure to bring heaven to any foodie.

Gujarati food is a blend of four delicious cuisine styles. First is Kathiyawadi cuisine. Along with a border, Gujarat shares the delicacy of Kathiyawadi cuisine with Rajasthan. This cuisine is spicy as opposed to other regional food of the state. Surat, a city located in southern Gujarat, is known for its love of food; hence, next cuisine is Surti cuisine. Undhiyu, a mixed vegetable dish and a signature seasonal dish of the state, is specialty of Surat. Amdavadi cuisine is another most loved food. The sweet flavour of Gujarati food basically comes from Amdavadi cuisine. Kutchi cuisine, on contrary, is influenced by arid geography of Kutch; Dabeli served with spicy garlic-chutney is a crowd pleaser.

Nevertheless, when viewed through the alluring glasses of advancing India, Gujarati food culture and food industry are not just limited to that. Due to the rise of restaurant industry, food & beverage industry in Gujarat and pan-India is reaching newer heights. Gujaratis are food lovers and open to all food experiments; hence, all types of cuisines are now being cherished in the state. Today, Mexican, Italian and Thai are favourite among the crowd. Starting from Gujarati Maharaj cook to executive chefs in 5-star hotels, the profession is blooming for cooks in Gujarat. In the quest of growing food industry and to hire Gujarati cook, franchising is working tremendously well. Along with international brands, local brands are also seeing good market.

For chefs and cooks in Gujarat, new food trends are majorly marking upcoming years. Given that Gujaratis are vegetarian, people are now diverting their attention to natural food, and a lot of healthy things are appearing on menus of various restaurants. Established local restaurants and the upcoming new ones are offering thousands of job opportunities to Gujarati Maharaj cooks.

In order to hire Gujarati cooks and Gujarati Maharaj cooks, Ahmedabad is emerging as an astonishing metropolis, ultimately, attracting the establishments of best restaurants and local eats. Owing to their business lifestyle, people of Ahmedabad have become globe-trotters. Having tasted varieties of cuisines from different parts of the world, they are now open to experimenting with food and incorporate many types of international cuisines into their diet. As the majority of the population is vegetarian, hotels like Courtyard Mariott, Ahmedabad, offer their guests an Indian vegetarian fine-dining experience; a restaurant called Shakahari, which has, over the period of time, imbibed a mark over the city over the past years. Gujarati cooks in Ahmedabad strive better than they can to make their customers happy while eating.

Dating back to 1920s, Agashiye, an Indo-Barbeque heritage provides promising future to cooks in Gujarat. In the long run, Dakshinayan, Vishala, The Eatery, Moti Mahal are always open to satisfy taste buds of food lovers. While recreating their menus as per the new-found taste buds of people, right from Gujarati Maharaj cooks to famous chefs are experimenting with their authentic recipes, giving them the exotic classy touch. Among popular chefs in Gujarat, Tarla Dalal is a legendary name recognised across most of the Indian kitchens and hotels. Her passion for cooking drove her to organize cooking-classes at her home. But very soon, she published her first book in 1974, The Pleasures of Vegetarian Cooking. Another inspiring name to all cooks in Gujarat and to hotels that hire Gujarati cooks, is Chef Pranav Joshi. He is known for bringing an international twist to local vegetarian dishes. People know him from his very popular cooking show—Rasoi on ETV Gujarat. His recipes were then cherished by Food Food channel in the show called Budget Kitchen.

The craze of Gujarati food is not only bound by the borders of the state. These beloved Gujarati recipes are also very much celebrated in Uganda, in East Africa. Blending African food culture with spices from her mother’s native country, Chef Meera Sodha is a passionate food-blogger. In July 20004, her first cook-cook, Made in India, was published by Figtree, Penguin. Not stopping at that, in 2016, she published her second cook-book, Fresh India, which described India’s love of vegetables from the Chef’s point of view.

Incorporating global cuisines into original vegetarian context of cooking, has brought plethora of multinational cuisines and world-class food heritage to Indian food platter along with essential requirements. The profession of cooking is reshaping itself to higher standards, and future for Gujarati Maharaj cooks and cooks in Gujarat is brighter and promising.

As the people on Gujarat are open to tasting new cuisines and trying out new recipes, there is no second doubt about promising future prospects for cooks in Gujarat. There is immense potential in the state and its food that awaits to be revealed.